What Is HTML & Why do we call Html as a markup language?

May 26, 2019
In this article, we will know what the "HTML is (What is HTML in Hindi)". Every person in this world needs a way to earn money so that he can meet his own needs and fulfill his dream. Different people work differently as someone does their own business and someone works inside a company. Whether the work is big or small, the person has to work hard in every work, then only he can succeed in his life. Just like a blogger earns money by working harder through Internet.
Just like other work requires hard work and perseverance, it is also very hard to blog.  To blogging a person does not want much more than just a computer or laptop and has an internet connection.  And what is the most important thing to be blogging is to have "knowledge".  The most important thing to start blogging is to create your own website.  And what to do to create a website?  HTML should be fully knowledgeable.  If a breakthrough is required in the blogging world then it is very important for a blogger to have knowledge of HTML.
But everyone has no complete knowledge about HTML, and those who want to start their career in blogging and want to become a successful blogger, it is very important for them to have this knowledge.  Today, in this article, I am going to tell you what is the specialty in HTML? And it's made to create a webpage or website.

HTML is a MarkUp language that has been developed to create web docs. HTML is a very simple Computer Coding Language. Its development took place in the 90s. HTML is the basis of a web page and web pages are the basis of a website. HTML uses the 'tags' to create a web document.
We call the Hypertext Markup Language as a small name HTML. HTML is the language of a computer used to create a website.  And CSS is used to give it a color shape.  This language is very simple compared to other languages ​​like computer, C, C++, JAVA, etc. It can be used by any person to readily and in a very short time.
Once the website is created with the help of HTML, any person in the world can view the website through internet. HTML was discovered by physicist Tim Berners-Lee in Geneva in 1980. HTML is a platform-independent language that can be used in any platform such as Windows, Linux, Macintosh etc.
Now an idea must have been stirring up your mind and it should be too. But, what is that? The above HTML is called Markup Language? But what is this Markup Language? Let's know it too.

Why do we call Html as a Markup Language?

Full form of HTML or full name is Hypertext Markup Language. In which each word has different meanings. Let's now know the meaning of each word. And understand why HTML is called Markup Language?

Hypertext is the way by which the web is explored. This is just a simple text.  However, Hypertext puts any other text with it that is activated by mouse click, touch or by key press. This special feature separates it from simple text. Hypertext is called Hyperlink. Hyperlink can be made to any text by HTML's Anchor (<a>) tags. In addition, images, videos, sound etc. can also be made to Hyperlink. This is called Hypermedia. Another feature of Hypertext is that it does not have linear meaning that Hypertext can be activated in any order.

Uses "HTML Tags" to create HTML Web Document. Each HTML tag defines the incoming text in its own way, which is called Markup itself. "<I>" is an HTML tag that italic does the text coming in between.  Understand this with an example. We take a word of "Pagalwaga" which is written as simple as what we are seeing "Pagalwaga" just like normal text. Now we do this by markup via HTML. And in Markup we skew it. When Pagalwaga is written between <i> </ i> and <i> Pagalwaga </ i> between these two symbols then this word will appear like this "Pagalwaga". That means it has been diagonized (italic). 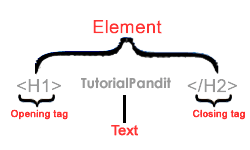 There are three possible pieces of HTML syntax, which are Element, Tags and Text respectively. HTML Element is made up of HTML tags. The word or letter written between Angel Bracket is called the HTML Tag, it is of two types. First, the opening tag and the second closing tag. And the last part is the text that is written between the HTML tag.

What is the use of HTML?

Creating a webpage using HTML is very easy, for that you need two things - the first is a simple text editor such as the notepad in which the html code is written and the other should be a browser like Internet Explorer, Google Chrome, Mozilla Firefox etc. Your website gets recognized and the internet user can see. HTML is made up of a series of small codes which we write in notepad, these small codes are called tags. HTML tags tell the browser how and how to show elements written within that tag in the website.
HTML provides a lot of tags that give your website an attractive look at the use of graphics, font size and colors, after writing the HTML code, you have to save your document, save the name of the html file  It is necessary to write .htm or .html with that, then it will show your html document in your browser, otherwise it will not.
After saving, you have to open the browser to view your html document. That browser will read your html file and translate the code written in your correct way and will show it correctly to your website as you would have thought when writing code.  Your web browser HTML tags do not appear in the website, but they use those tags to display your document correctly.

Let's go a bit back in the HTML world and try one to know its history.  The development of HTML was done in the 90's and still continues. Because HTML is a constantly developing language. There have been many versions till now. HTML is the brainchild of Mr. Tim Berners Lee. First they used HTML only. At present, the development of HTML is near an organization "World Wide Web Consortium (W3C)". This organization now takes care of HTML. Let's know about the HTML versions so far.
HTML is its primary version. This version was the form of the SGML -Standart Generalized Markup Language. Through this, text could be structured. Some tags were created for this and there was no name for this version, it was called HTML only. But the next versions of the HTML were named hence the version is also called HTML 1.0 for convenience. Some of the tags that were used in this time of HTML tags are still present today, which we use while working on HTML.

Today we know what HTML is (What is HTML in Hindi), how it works and some of its basic tags. As I had already said that HTML is a very simple laguage of the computer, it can teach it easily. And for a blogger it's important to have knowledge of them so that they can design their website well. Hope this article will help you to learn something about HTML. If there are any questions then feel free to comment and feel free to help me.

December 28, 2019
Hey guys, are you searching about 100% fix kalyan mumbai single jodi patti on Google. Don't worry, today we are sharing matka jodi for free via matka india. So without wasting any time, let's begin. Kalyan & Mumbai Singal Jodi Patti Here is the 100% fix kalyan and mumbai market jodi patti for free. 🔱Kalyan🔱 Date: 30th December ~~~Open to Close~~~ Kalyan - 3333 - Pass Special Jodi Kalyan - 38 - Single Jodi Pass Special Patti Click Here According to @Matkaindia, The kalyan matka is a popular market of matka. Just because of their popularity, it is deserve the single jodi patti that we are provided via matka india. All the 100% fix jodi patti is verified by profesional astrologers. In other words, we confirmed that all the following jodi and patti are coming soon. Credit Jodi:- MatkaIndia.net Patti:- MatkaIndia.net Author:- Unknown Direction:- Satta Matka And Team Others:- Dpboss.net Note:- Please do not treat this article as a c
4 comments
Latest Updates »